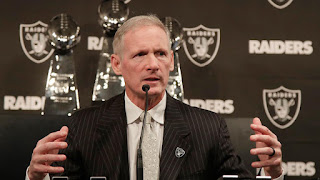 With 1 day before 2019 and the disaster of 2018 season over the rebuild has now officially begun!
It's no secret that Jon Gruden already has already started this project by doing great things, for example trading the most overrated Wide Receiver in the NFL in Amari Cooper and robbing the Cowboys of a 1st round pick in 2019.

Not to mention moving on from the most overrated GM in the NFL in Reggie McKenzie.
Now today the announcement that truly shows the genius of Jon Gruden (or Mark Davis as I heard)
Raiders went out and hired a TRUE draft guru in Mike Mayock. Yes, he is on TV and has no experience at being a GM but keep in mind Mayock is not going to be structuring contracts, the title of "GM" is just that, a title.  Raiders brought in Mayock in for the draft and his expertise with players. Remember this guy studies guys coming out of college not just 2019 but 2020 and even 2021. Nobody is more up to speed about college players than Mike Mayock.

Keep this is mind too, Mayock is not afraid to take a middle linebacker early in the draft like McKenzie used to be. Mayock used to do draft boards for all 32 teams and now he can put all his focus on one team which will make him even better in what he does.  Also fun fact, the late Al Davis was also interested in Mayock and Mark Davis has been asking him since 2014 if he would be interested in joining Raiders.

Yes, this season was a disaster, it started as a disaster with having to deal with Mack...Oh there's another Mack reference! Raiders press loves Mack!!! So I figured I would throw that in there just for them. Tine to move on, luckily most of those hacks won't be covering the Raiders in 2020.

Mike Mayock won't be coming in alone, he will be bringing in some of his own guys as well. Raiders have a ton of money to spend in free agency and Mayock is not dumb, like he said at his presser today, you can't just throw all the money at one guy.  Raiders now have some tough decisions to make going forward, for example do you trade Carr for a first round pick?  Right now Raiders don't know that question but certainly they will know in the coming weeks.

One thing is 100% Jon Gruden and Mark Davis are doing what they need to do to MAKE THE RAIDERS GREAT AGAIN!