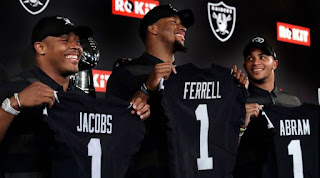 The soon to be Las Vegas Raiders killed it in 2019 free agency, adding the top WR in the NFL Antonio Brown, remember Raiders also pulled the heist of the century by shipping off an overrated and soon to be over priced Amari Cooper to Dallas in exchange for a 1st round pick. Raiders got better linebackers, the best WR group together, an excellent safety and the top O Linemen in Free Agency.

Mike Mayock went into the draft knowing the needed a pass rusher, he got one right away with the 4th overall selection of 2019 draft with Clelin Ferrell. Yes, they reached for him but only because nobody bought the notion they would seriously take a QB in the 1st round but they had a need and didn't think he would be there at 24 and not to mention they had plans for 24 so they took the best 4-3 DE available early, who cares it's a human who can get after the QB.
Now that 24th pick, this was a pick that Jon Gruden wanted for months and he actually ended up getting. That is very rare in the draft unless you are picking either number one or two. Raiders loved the RB from Alabama. This guy has it all, he can catch out the backfield, he can block and he can run fast. Josh Jacobs was selected and now Raiders have their RB of the future.
At the 27th pick Raiders decided they needed to replace Karl Joseph eventually with a guy who is billed just like Karl Joseph was coming out but a much better player, plus Joseph is a McKenzie pick. Gruden does not want to win nor does he think he can MAKE RAIDERS GREAT AGAIN with McKenzie players so he got his own hard hitting safety who can also cover in Johnathan Abram.
There's not many McKenzie players left on the roster and that's all by design, hell Gruden and Mayock even fired McKenzie staff and his sleeping brother. Now of course in 2019 it's up to Derek Carr to succeed. He has the best WR group in the NFL, he has better protection, he has a top RB. It is solely on Derek Car in 2019 to be at his best so Mayock and Gruden can decide if he is in the future plans of Sin City. Regardless each and every day Jon Gruden and Mike Mayock continue to have one goal....
that is to MAKE RAIDERS GREAT AGAIN!