2020 Raiders a tale of failure 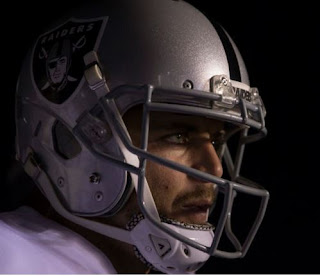 The draft selections have not equaled wins just yet but maybe, just maybe Raiders need 1 more year with a revamped defense and a quality defense coordinator. The offense has talent but it's all about putting that talent together and being consistent.

Popular posts from this blog

January 12, 2021
The 2 weeks of waiting is finally over, even know the decision been in the works since last week. Raiders have officially hired Gus Bradley to try to get the defense back on track. Bradley knows Jon Gruden as he worked with him in Tampa Bay. Now Gruden must hope Bradley can do better than his other buddy Paul Guenther who got fired with just three games left in the 2020 season.  Raiders could hire a few other coaches on defense, but that's something they can build on as they move forward. Some could stay or everyone just goes but I think there will be a few guys who stay on staff.  The reason Gus Bradley landed the job other than just being friends with the head coach and the guy who runs the entire organization (Jon Gruden )  is because he won the "Experienced" title over the other guy Gruden liked Kris Richard.  Kris Richard won't be joining staff as he only wants a shot at being the defensive coordinator somewhere. Which is a shame
Post a Comment
Continue Reading

Should The Raiders Use 2021 Draft Picks Or Trade Them

January 09, 2021
General manager Mike Mayock, the former scouting and draft guru of NFL Network, has committed a ton of draft capital on defense in the last three years. However, his players selected: Johnathan Abram, Clelin Ferrell, Maxx Crosby, Damon Arnette, Isaiah Johnson, Tanner Muse, Quinton Bell, Trayvon Mullen, P.J. Hall, Arden Key, Nick Nelson, Azeem Victor, Maurice Hurst, and Amik Robertson are collectively not getting it done. Biggest weakness The Las Vegas Raiders have a ginormous weakness to strengthen. Defensively they were extremely inconsistent and in desperate need of coaching. Former defensive coordinator Paul Guenther was not the most relatable coach and his inability to communicate his scheme to the players led to his unceremonious departure in week 14. COVID-19 wreaked havoc on NFL veteran's normal preseason preparation, but it also gave the rookies of 2020 no chance to get acclimated to NFL football before the word go and the season opened up.  There wasn't a conventiona
Post a Comment
Continue Reading

January 08, 2021
Jon Gruden is on the hunt to fix his defense after the debacle that was the 2020 Las Vegas Raiders defense. Raiders fired Defensive Coordinator Paul Guenther in week 14 after another embarrassing performance on defense Jon Gruden looked for someone to blame and pointed at his best friend Paul Guenther. The Raiders only had 3 more games to play so the timing was odd but Gruden then tapped his other buddy Rod Marinelli   to move from Defensive line coach to Coordinator. Marinelli came into 2020 replacing Brenston Buckner, a players favorite and maybe the most talented coach on Raiders 2019 defense Buckner coached rookie Maxx Crosby who shined with 10 sacks, even veteran Benson Mayowa got 7 sacks. In 2019 Raiders defense was by no means great but they were far better at getting after the QB. Raiders in 2019 managed to get 32 sacks which was not good enough for head coach Jon Gruden . The plan to
Post a Comment
Continue Reading