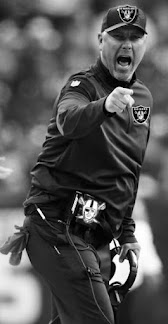 The 2 weeks of waiting is finally over, even know the decision been in the works since last week. Raiders have officially hired Gus Bradley to try to get the defense back on track. Bradley knows Jon Gruden as he worked with him in Tampa Bay. Now Gruden must hope Bradley can do better than his other buddy Paul Guenther who got fired with just three games left in the 2020 season.

Raiders could hire a few other coaches on defense, but that's something they can build on as they move forward. Some could stay or everyone just goes but I think there will be a few guys who stay on staff.  The reason Gus Bradley landed the job other than just being friends with the head coach and the guy who runs the entire organization (Jon Gruden)  is because he won the "Experienced" title over the other guy Gruden liked Kris Richard.

Kris Richard won't be joining staff as he only wants a shot at being the defensive coordinator somewhere. Which is a shame that Raiders could not convince him to take any role for a year but we shall see what Bradley and Gruden decide to do moving forward. This will not be an easy task for any new coordinator on defense for the Silver and Black.   Everyone knows how bad the defense was in the 2020 season so you can't possibly be worst so Bradley does have that going for him. The hope is Bradley can run his 4-3 defense and make it more simple for the younger players which in return is a good thing. Before Raiders had to go looking for some Bengals cast-off to help teach people Paul Guenthers scheme which was confusing for a lot of players which is why Reggie Nelson and guys like Leon Hall got signed when they were near 80 years old. In all fairness I bet Reggie Nelson would be a better safety than what Raiders now have though.

So now we see what Raiders do in the offseason, this team has a lot of needs including D line and some pass rushers which Raiders could do in the draft early unless they cut Trent Brown, in that case they might need to go offense line in first which is worst TV for everyone involved. The defense also lacks anyone good at safety and the Raiders need some CB's that don't get burned every play. There's a list of players on that defense that simply need to go, some can't due to contracts and those are the guys we need to see if Bradley can make any better.