Should The Raiders Use 2021 Draft Picks Or Trade Them 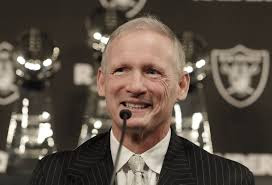 The Las Vegas Raiders have a ginormous weakness to strengthen. Defensively they were extremely inconsistent and in desperate need of coaching. Former defensive coordinator Paul Guenther was not the most relatable coach and his inability to communicate his scheme to the players led to his unceremonious departure in week 14. COVID-19 wreaked havoc on NFL veteran's normal preseason preparation, but it also gave the rookies of 2020 no chance to get acclimated to NFL football before the word go and the season opened up.

There wasn't a conventional draft, in fact all of the draftees were at home watching Roger Goddell get wasted in his basement. What this young group of players needed and didn't get was a chance to practice and get developed into the players that they were needed to be. No minicamps, no organized team activities, no joint practices, nothing. After the scouting combine and individual pro days most of these guys were left on their own.

Now, don't get me wrong. I'm not coming down player's roads for not being allowed to get a chance to practice and develop. It's certainly not their fault that COVID turned the whole world upside down, leaving the league scrambling to put a product together so we could still have a season. The problem is, out of the 14 draft picks spent on defense, the Raiders are only getting starter level production from four or five of these guys. Four of these guys aren't even on the team anymore, including former second round pick Hall. What's even worse is that Hall was playing like the guy the Raiders drafted, for his new Houston Texans team, before he got hurt.

2021 even more difficult to scout

The 2020 NCAA college football season was one like no other. It wasn't synchronized at all, in fact most of the power five conferences all started at different times. Many of the star players for big time programs opted out of the season for safety reasons. Meanwhile, constant fluctuation of available players, along with the inability to consistently practice in their own facilities, and  shortened seasons make it even more difficult to properly scout players in 2021.

While nothing is set in stone and no official determinations have been made, the 2021 scouting combine may be in jeopardy. Currently, the Reese's Senior Bowl is still on schedule in Mobile, Alabama. Whether or not the rest of the collegiate showcase games and practices are remains to be seen. Without access to players and the perils of traveling for the scouts, what type of player evaluations can really be obtained. Zoom meetings care good for installs and the mental side of the game, but one can only imagine how difficult it is to obtain a genuinely candid response.

Needing an influx of talent, defensive leadership, and let's not forget a defensive coordinator who can develop players, sketchy scouting won't help the Raiders.

Looking at the salary cap, the Raiders are currently -$7,622,096 according to www.overthecap.com. Cutting players without any dead cap money can save roughly $58.25M, everyone except Darren Waller. There is a drastic need to get more production on defense and find the longterm answer at right tackle. Trent Brown, when healthy is the best option, but Brown has lived the good life of having cashed in on the major contract. Lacking regular availability, and being the second largest cap hit makes him both a potential cap casualty and a trade piece.

Devoid of cap space, the Raiders have also demonstrated that they may not be far off. In fact with an offense which was ranked 11th in scoring and 8th in yards, they maybe close enough to sell out for a couple high impact defensive stars to get them over the top. It might behoove the Raiders to use their draft picks and expensive players with cheaper capable backups behind them to trade for the pieces they so desperately need.

It's not like the Raiders are hitting on their draft picks with regularity since Mayock took over, and to take the next step they need a huge amount of young player development and at least one defensive superstar. They need a new depth chart of talented safeties capable of covering the field, and a dominating defensive tackle. Premium players at either of these positions do not come cheap and drafting guys circles us back to the need for player development, which quite frankly hasn't been very good.

The majority of the Raiders organizational success has come from veterans and guys they haven't had to teach how to be pros. Keeping with that mindset, perhaps the 2021 draft picks would be better suited using on proven players then unproven players.